CCRES - HOW NOT TO

CROATIAN CENTER OF RENEWABLE ENERGY SOURCES
HOW NOT TO INSTALL 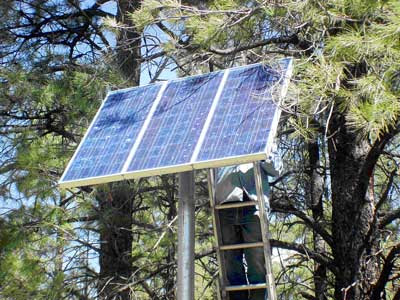 This PV array was installed under a tree and as a result the branches of the tree were casting shadows on the PV modules.

These shadows have a severe impact on system performance because the current produced by a PV module is determined by the least illuminated cell in the PV module. In this case all three PV modules have shadows cast ...by the over-hanging tree.

In full sun we measured an output of about 5 amps with the shadows shown above. There was also an area of sap over one of the solar cells (photo does not show this). After the branches were trimmed back, the current increased to about 9.5 amps. Cleaning the sap covered area increased the current to 10.5 amps, the expected value for the three PV modules.

These are photovoltaic powered restrooms. The view is to the Northeast at about noon in February. The photovoltaic module provides power for operating a vent fan for a composting toilet. Unfortunately, the photovoltaic module on the right restroom is facing West and as a result gets very little sunshine. In addition, the shadow cast by the vent pipe is shading the module and further reducing the output. 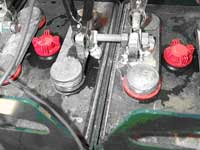 Photo shows the situation after a battery discharge test at 300 amps was terminated on a 1530 AH IBE battery string when one post melted.

During the discharge test all cell voltages are logged. The sum of the cell voltages was 2.73 volts lower than the 48-volt string voltage. This is an average of 118 mv per inter-cell connect...ion, 5-10 mv is the normal range in a properly connected battery bank.

Lesson learned: Bolts are not for current carrying. Bolts are to hold lugs, etc. in tight contact with electrical terminals. 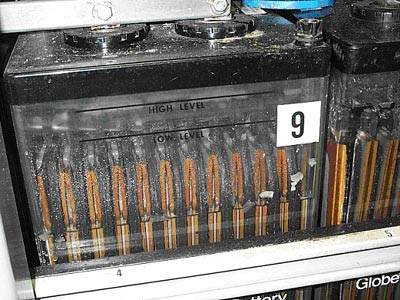 During normal operation, water is lost from a flooded lead-acid battery as a result of evaporation and electrolysis into hydrogen and oxygen, which escape into the atmosphere. One Faraday of overcharge will result in a loss of about 18 g of water per cell. Evaporation is a relatively small part of the loss except in very hot, dry clim...ates. With a fully charged battery, electrolysis consumes water at a rate of 0.336 cm^3 per cell per ampere-hour of overcharge. A 5000-Ah battery overcharged 10% can thus lose 16.8 cm^3, or about 0.3%, of its water each cycle. It is important that the electrolyte be maintained at the proper level in the battery. The electrolyte not only serves as the ionic conductor, but also is a major factor in the transfer of heat from the plates. If the electrolyte is below the plate level, then an area of the plate is not electrochemically active; this causes a concentration of heat in other parts of the battery and “Sulfation” of the dry portion of the plates which may not be reversible. Periodic checking of water consumption can also serve as a rough check on charging efficiency and may warn when adjustment of the charger is required.

Since replacing water can be a major significant maintenance cost, water loss can be effectively reduced by controlling the amount of overcharge and by using hydrogen and oxygen recombining devices in each cell where possible. Note that these devices can overheat and cause battery damage if the battery is charged at a high rate. Read specifications carefully, the expensive “Caps” may need to be replaced before the end of battery life. Addition of water is best accomplished after recharge and before an equalization charge. Water is added only at the end of the charge to reach the high level line. Electrolyte expands as the battery is charged significantly increasing in volume. Therefore overfilling must be avoided because the resultant overflow of acid electrolyte will cause tray corrosion, ground paths, and loss of cell capacity. Gassing during overcharge will stir the water into the acid uniformly. In freezing weather, water should not be added without mixing as it may freeze before gassing occurs. Only distilled water should be added to batteries. Although demineralized or tap water may be approved for some batteries, the low cost of distilled water makes it the best choice. Automatic watering devices and reliability testing can reduce maintenance labor costs further. Although distilled water is no longer specified by most battery manufacturers, good quality water, low in minerals and heavy metal ions such as iron, will help prolong battery life.