California Solar PV May Be Cheaper than Gas - SOLAR SERDAR 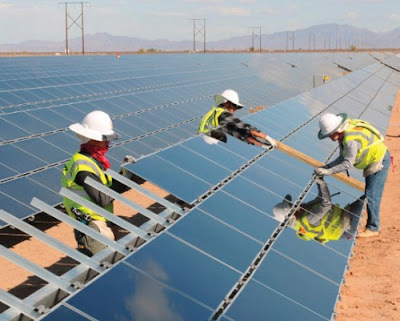 California Solar PV May Be Cheaper than Gas
SOLAR SERDAR

Southern California Edison (SCE), a California utility company, recently requested approval for 20 solar PV projects from the California Public Utilities Commission (CPUC). The project would generate approximately 567 GWh of energy in all – and would do it for less than the cost of natural gas.


Exact details won’t be revealed for a few years, but SCE reports that most solar developers submitting bids for the projects provided very competitive prices that were below the estimated cost of electricity from a 500-MW combined-cycle natural gas plant. The new solar projects will be between 4.7 and 20 MW.

Natural gas prices are dropping significantly as a result of surplus and decreased demand, but the cost of solar projects and solar electricity are dropping right along with them. The difference is that demand for PV remains strong because states like California maintain strong solar requirements.More info at http://solarserdar.wordpress.com.

SCE maintains a very positive position on solar PV, calling it “a mature and proven renewable energy technology”. PV continues to be a superior option to large-scale concentrating solar power projects (CSP) in a number of situations. This is due in large part to the reduced cost of production, cheaper modules, and advancements in Balance of Systems technologies.More info at http://solarserdar.blogspot.com.

A recent GTM Research report compares CSP and PV projects of similar size and predicts that electricity from PV plants will cost substantially less than some CSP technologies. The researchers suggest that CSP electricity will be generated at $0.10 to $0.12 per kWh range while PV electricity production will be in the $0.07 to $0.08 kWh range.

California is a great place for PV with its elevated demand, many “spinning reserve” power plants, and plenty of sunlight. But as long as solar project costs keep dropping and utilities keep advancing the technology, development of grid opportunities are likely to occur across all markets very soon.