The turbines not only produce power, they produce wakes 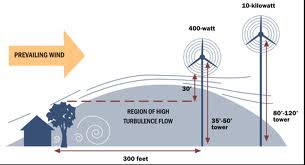 Wind Turbines: In the Wake of the Wind

ScienceDaily - On the Front Range within the Rocky Mountains, prevailing winds sweep eastward over the mountains smack into the National Wind Technology Center. Several wind turbines, some taller than a 40-story building, spin and hum at the site, just outside of Boulder, Colo., waiting for an experiment to start in the next month.

The turbines not only produce power, they produce wakes -- similar to what forms in bodies of water -- that are invisible ripples and waves and other disturbances in the atmosphere downstream that can damage turbines and decrease efficiency. Lawrence Livermore National Laboratory researchers and collaborators will launch a study of those wakes this month, with an eye toward improving the efficiency of wind farms.
The scientists also will collect valuable data that will help validate the wind flow models developed at Livermore and other laboratories and universities.
"This study is part of a larger suite of observational and model development efforts under way at LLNL to help attain aggressive state and national targets for renewable energy deployment," said Jeff Mirocha of LLNL. "This field campaign dovetails with ongoing observational studies at our Site 300 that are focused on understanding the complex wind patterns occurring in hilly, coastally influenced locations, which is similar to much of California's wind resource."
Livermore is working with the University of Colorado, National Oceanic and Atmospheric Administration (NOAA) and the National Renewable Energy Laboratory (NREL).
The Laboratory also has been working on numerical weather prediction models to predict power generated by the wind, so that wind farms can operate more efficiently while providing more power to the nation's hungry power grids. Predictive time frames range from an hour ahead to days ahead of time.
The new project entails experiments that will help make a detailed study of wakes created by wind turbines. Those profiles could help turbine and wind farm developers improve layout and design. "The wakes can damage turbines and affect turbine efficiency," said Julie Lundquist, a University of Colorado assistant professor who helped develop the models while at LLNL.
The study is aimed at an improved understanding and characterization of inflow conditions on turbines in complex terrain that would help engineers better understand, model, and design for turbine loading, turbine performance and power plant performance. The goal is to integrate advanced observational capabilities with innovative approaches to atmospheric simulation.
Researchers will collect meteorological data for validation of turbine wake models in a range of atmospheric stability conditions, including wind speed, wind direction and streamwise variance profiles.
Bob Banta, atmospheric scientist with NOAA's Earth System Research Laboratory, has spent the last several years using a sophisticated instrument -- a high-resolution, scanning dopplar lidar -- to make three-dimensional portraits of wind speeds and directions in the atmosphere. For the wind technology site project, the research team aims to capture turbulence and other wake effects in a broad wedge of air up to 7 km (4.3 miles) long and 1 km (3,280 feet) high.
The team will use the scanning lidar to make a detailed look at the atmosphere in front of and behind one of the large turbines on the NREL site: a 2.3-megawatt tower that stretches 100 m (328 ft) high to the central hub and 145 m (492 feet) to the top of a blade.
The researchers hope to capture the effects of ramp up and ramp down events, when winds suddenly gust high or die down, and they will gather data on what happens downstream when winds shift direction quickly.
"This generation of wind turbines is stretching up into a complicated part of the atmosphere," Lundquist said. "If we can understand how gusts and rapid changes in wind direction affect turbine operations and how turbine wakes behave, we can improve design standards, increase efficiency, and reduce the cost of energy,"
According to the American Wind Energy Associations, wind energy made up 2.3 percent of U.S. electricity by the end of 2010, up from 1.8 percent a year ago. Researchers have argued that to attain the Department of Energy goal of "20 percent by 2030," the turbulent lower atmosphere -- and its effects on turbines and turbine arrays -- must be better understood.
Members of the Turbine Wake and Inflow Case study include: Banta and Yelena Pichugina of NOAA; Lundquist of the University of Colorado at Boulder and NREL's National Wind Technology Center; Jeff Mirocha of LLNL; Matthew Aitken, Michael Rhodes, Brian Vanderwende, Robert Marshall, University of Colorado at Boulder graduate students; and Neil Kelley and Andrew Clifton of NREL's National Wind Technology Center.
More info at http://solarserdar.blogspot.com.
CROATIAN CENTER of RENEWABLE ENERGY SOURCES ( CCRES )
Posted by CROATIAN CENTER of RENEWABLE ENERGY SOURCES at 7:35 PM