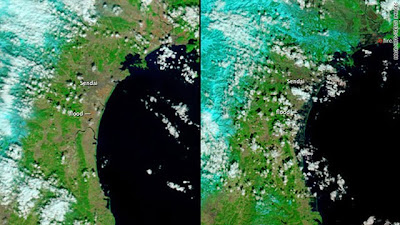 The Federation of Electric Power Companies offers a list of Japan’s nuclear plants including the locations and the specifications of each. In 1952, Japan’s nine major electric power companies established the FEPC to promote smooth operations within the industry. View map.

With the radiation level continuing to rise at the nuclear power plant in Fukushima, news has come in that the United States has sent coolant for the nuclear plant where the cooling system has failed.

‘It’s a really scary race against time,’ said Robert Alvarez, an expert on nuclear power and a former top official in the U.S. Department of Energy.

Problems have cropped up at the nuclear plant after an 8.9-magnitude earthquake shook Japan on Friday afternoon. Around 3,000 people living in the vicinity of the nuclear plant have already been evacuated amid fears of a radioactive leak.

Meanwhile, the plant’s operator, the Tokyo Electric Power Co, has announced that the air pressure inside one of the reactors has also been rising. The company has already undertaken a ‘normal procedure’ of releasing ‘a little’ air in order to release some of the pressure built-up. According to experts this is a normal procedure carried out during such circumstances.

Concerns have already been raised regarding the overall safety of nuclear power as news came in that the electrical system that supplies the plant’s emergency cooling system has also failed. The radioactive core needs continued cooling to prevent a meltdown.

Mobile power supplies have now arrived at the plant to restore the system, which had been operating on batteries.

U.S. Secretary of State Hillary Rodham Clinton has said that the U.S. Air Force in Japan had also transported coolant to the plant.

According to Alvarez, the earthquake has probably caused damage to the infrastructure that supplies water to the plant. An inability to get water pumped into the reactor within about a 24-hour period could result in severe consequences, including a possible meltdown of the reactor’s core, he added.

Two other Japanese power plants had reported fires in non-nuclear areas earlier Friday, but both were extinguished within a few hours.

After the explosion at the Fukushima nuclear power plant, Japan is now in a race to prevent meltdowns at its other nuclear power plants, declaring a state of emergency at five atomic reactors and evacuating thousands of residents, as it launched a mammoth relief operation in its northeast devastated by a massive earthquake that has likely left over 1,000 people dead.


In Fukushima Prefecture, there are already reports that radiation 1,000 times above normal has been detected in the control room of one nuclear plant, although officials said that levels outside its gates were only eight times above normal and asserted that were no health hazards as of now. However, status of this is unclear as of yet after the recent explosion at the nuclear plant.

The Nuclear and Industrial Safety Agency has said that it has already issued an unprecedented order for the electricity firm running the atomic unit to open a valve at the plant to release pressure in the container housing the reactor following the powerful earthquake.

A state of emergency has just been declared at two reactors at Japan’s Daiichi and three units at its nearby Fukushima Daini site.

The growing risk of significant radiation leak at two Japanese nuclear power plants following the earthquake and tsunami is threatening to hurt an industry that has enjoyed a rebirth since the Three Mile Island accident in 1979 and the Chernobyl disaster in 1986.

Following the disaster, nuclear power advocates and environmentalists have brought up familiar arguments over the incident. However, a wider public debate may be ignited if a major radiation leak occurs in Japan.

That debate has been largely muted since the 1980s when rock concerts were held to galvanize opposition to nuclear power after the Three Mile Island incident in Pennsylvania and the popular movie “The China Syndrome,” that raised awareness of the dangers of a nuclear reactor meltdown.

If there is a substantial radioactive release, there could even be questions about whether it could travel on the Pacific jet stream to the U.S. West Coast.

“It is serious and it could lead to a meltdown,” said Mark Hibbs, a nuclear expert at the Carnegie Endowment for International Peace. “And what we’re seeing, barring any information from the Japanese that they have it under control, is that we’re headed in that direction.”

However, Naoto Sekimura of the University of Tokyo, has announced that a major radioactive disaster was not likely. The actual picture remains to be seen once the extent of the damage caused due to the explosion at the nuclear power plant.

An already turbulent energy market has been rocked by the 8.9 magnitude earthquake and tsunami that has rocked Japan and the entire Pacific region.

Refiners and LNG importers all across Asia are now being faced with the rising danger of volatile oil prices as the earthquake and the tsunami that ravaged parts of Japan, and fears of unrest in key oil exporters rock the energy market.

Japan is the third largest oil consumer in the world and the natural disaster that has hit the country is expected to temporarily disrupt fuel demand from factories, aircraft and even automobiles in Japan. Japan imports most of its energy requirements, while the country’s power is majorly generated from nuclear energy itself.

Following on from the disaster, Brent crude oil, which had soared to nearly $120 a barrel in recent weeks because of turmoil in North Africa and Middle East, came down to $112, while the benchmark US crude, WTI, fell below $100.

Because of the hit Japan’s nuclear power plants have taken from the natural disaster, most of the nuclear plants in the country have been shut down, forcing the gas-fired power stations in Japan to burn more fuel, including liquefied natural gas, in an attempt to offset the shortfall in electricity in world’s top LNG consumer.

The shutdown of nuclear plants has also increased the demand for liquid fuel. What’s more, the usage of diesel-fired equipment to clear the rubble after earthquakes in countries such as Iran and China in the past has boosted oil demand. Industry officials say that they are expecting demand swings, which can trigger sharp ups and downs in the oil market.

Meanwhile, LNG importers are closely tracking developments in international markets as the tsunami warnings have been issued in the Pacific Ocean. Taiwan, Philippines, Indonesia, Mexico, Chile and Russia are among the countries where warnings have been issued. However, most of these areas have not suffered any heavy damages due to the tsunami. Industry officials say that last time a major earthquake struck Japan, LNG prices had doubled in the spot market.

“There are reports of nuclear power plant shut down in Japan that may fuel demands for LNG for electricity supplies in the crisis time. However, there are no reports of any accidents at nuclear power plants and hence we can expect them to start generation soon again,” Shell Hazira , MD Nitin Shukla said. “LNG prices depend on how soon energy machinery recovers from the calamity,” he said.