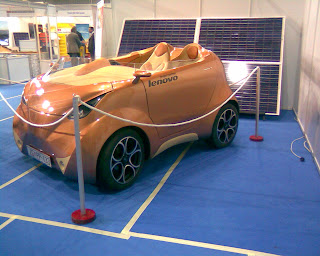 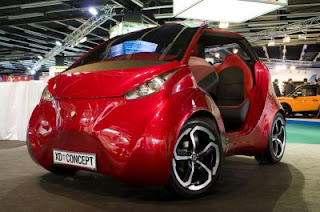 The XD is a concept electric vehicle that seats three adults and has a powerful electric engine that is capable of achieving 0-100 km/hr in 7.7 seconds. The XD combines the most attractive features of a city car in an attractive package. The small length (2.8 meters), comfortable interior (width 1. 7 meters, height 1.6 meters), and performance of a compact sports vehicle (0-100 km/hr in 7.7 seconds) is sure to get the attention of investors and car enthusiasts alike. Let’s not forget that all this comes with 0 CO2 emissions. In designing the XD, DOK-ING used its experience as a global leader in manufacturing specialized vehicles. Technology developed in manufacturing remote-controlled, diesel, hybrid, and electric powered machines for the demining and underground mining industries proved to be key to finding the right components for the electric car. For more information, please visit www.xdconcept.com

XD: an extra big smile A little while yet, and the recession is behind us, were the commentaries of major manufacturers at the just recently ended motor show “Geneva 2010″. To confirm it was also the audience and its interest in new vehicles. Among the new items was for the first time also one from Croatia – XD Concept of the Zagreb Doking. Despite a great uncertainty when speaking of its destiny, it was exposed at the entrance into the Green Pavilion of the motor show. Vainly, as from the first day it has been arresting the attention of all visitors. The media also gave it an exceptional publicity, visitors and exhibitors from other stands pushed around in order to sit in it, and potential investors and manufacturing associates started talking business on their own initiative. I am so happy that this concept of our urban electric XD has attracted such great attention – declared the director of Doking and chief designer of XD Vjekoslav Majetić upon his return from Geneva. He concluded with the following words: I am taking it as the recognition to our commitment to create completely new concepts reconciling solutions which until yesterday, without sophisticated information technologies, had been inconceivable.More info at http://solarserdar.blogspot.com/.

To this conclusion have come also a great number of media from all over the world, describing the XD, this comfy and spirited urban electric automobile, as the ‘Small Croatian Pocket Rocket’ and pointing it out as one of the sensations of the Geneva 2010 motor show not to be missed. Namely, most of the journalists agree on this, that no one has offered so far in an urban automobile so successful combination of comfort, driving properties and functionally conceived attractive design. Thousands and thousands of visitors have demonstrated it in their own way. A person had to force one’s way through a crowd of eager automobile lovers to reach the exposed XD, and to sit in it one had to queue up. This is an excellent affirmation of our concept of the driver subordinated driver’s cab, in effect of the fact, that we have succeeded in creating a ‘merger of the future’ – a combination of three automobile classes in one, and many other manufacturers are evidently thriving to do the same – commented the project manager of XD Tomislav Boško. Doking is very satisfied also with the business effects of participating at the Geneva motor show. The first day already they have received several offers to buy off XD in its current prototype execution, and then came the offers of potential cooperation with big automobile companies, but also of investments in production of this urban electric car in Croatia. Estimates of Doking are that the first XD series may be delivered to the market in one year at the earliest, at a price of 25 to 30 thousand Euros for the standard vehicle equipment, have been appraised as very real – moreover, almost 10 thousand serious inquiries arrived, while the first fifty XD have already been sold. Now is the turn to make the first tests of XD and homologation – this is the end of the serial production feasibility study and the next step are detailed discussions with investors. The fact that as a small company from Croatia we have attracted great interest of global public, both with respect to design and excellent performances of XD, and that we have on equal footing with big automobile industries presented our concept of electric automobile, gives us the right to have faith in the future of the first Croatian serial automobile – it is stressed in Doking after the Geneva motor show.

Posted by CROATIAN CENTER of RENEWABLE ENERGY SOURCES at 7:41 PM