Using algae for reducing the CO2 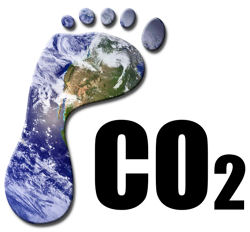 Algae live on a high concentration of carbon dioxide and nitrogen dioxide.  These pollutants are released by automobiles, cement plants, breweries, fertilizer plants, steel plants. These pollutants can serve as nutrients for the algae.
When fuels are burned there remains, besides ash, a certain number of gas components. If these still contain combustion heat, they are called heating gases. As soon as they have conveyed their energy to the absorbing surfaces of a heat exchanger, they are called flue or stack gases.
It further contains a small percentage of pollutants such as particulate matter, carbon monoxide, nitrogen oxides and sulfur oxides.

Carbon dioxide (CO2)
—the primary greenhouse gas responsible for global warming—along with other pollutants.Its composition depends on what is being burned, but it usually consists of mostly nitrogen (typically more than two-thirds) derived from the combustion air, carbon dioxide (CO2) and water vapor as well as excess oxygen (also derived from the combustion air). Using algae for reducing the CO2 concentration in the atmosphere is known as algae-based Carbon Capture technology. The algae production facilities can thus be fed with the exhaust gases from these plants to significantly increase the algal productivity and clean up the air.  An additional benefit from this technology is that the oil found in algae can be processed into a biodiesel. Remaining components of the algae can be used to make other products, including Ethanol and livestock feed.This technology offers a safe and sustainable solution to the problems associated with global warming.
CCRES SPIRULINA
project of
Croatian Center of Renewable Energy Sources (CCRES)
Posted by CROATIAN CENTER of RENEWABLE ENERGY SOURCES at 6:30 PM