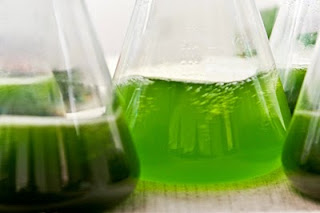 CCRES ALGAE PROJECT
Algae is uniquely suited to serve as the foundation for a new generation, the next industrial age of renewable and low carbon transportation fuels. It addresses and solves many of the pressing issues of our time, from climate change, to energy security, to jobs. It sets an infrastructure that will require fewer compromises and more reliance on ourselves to feed our own energy consumption needs.

Algae is one of nature′s most prolific and efficient photosynthetic plants; in fact, it is the source of the earth′s crude oil when algae bloomed millions of years ago. Nearly all of algae′s energy is concentrated in the chloroplast—the engine that turns sunlight and CO2 into organic carbon, resulting in oils easily refined into gasoline, diesel, and jet fuel. Further, algae has a short growing cycle and does not require arable land or potable water. Algae′s number one nutrient source is CO2, consuming 13 to 14 kg of C02 per gallon of green crude. Algae can be grown quickly in salt water in the desert.
The process for making algae into fuel at a very base level is this: Sunlight and CO2 are the source of energy and carbon dioxide, rather than sugar or other organic material. By applying the principals used in biotechnology, CCRES can produce oil in algae that is highly branched and undecorated - the way that traditional crude is – to get a biological crude molecularly similar to light sweet crude. This Green crude can be than processed at a refinery just as traditional crude to make all three major distillates – gasoline, diesel, and jet fuel.
Algae are the most efficient photosynthetic plants on the planet as no energy goes into making roots, stems, seeds, or flowers. More energy (roughly 6-50 times more) is produced per acre, per year, with algae versus other feedstocks.
CCRES ALGAE PROJECT
part of
Croatian Center of Renewable Energy Sources (CCRES)
Posted by CROATIAN CENTER of RENEWABLE ENERGY SOURCES at 1:10 PM