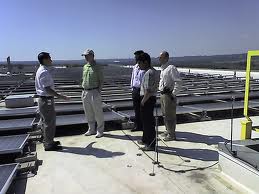 News and Events by CCRES

DOE announced on December 19 that it will give the public the chance to vote for the most innovative and promising technologies supported by the "America's Next Top Energy Innovator" challenge. In all, 36 start-up companies elected to participate in this first-of-its-kind effort. These companies have signed 43 option agreements allowing them to license cutting-edge technologies developed and patented by one of DOE's 17 national laboratories and the Y-12 National Security Complex, one of four production facilities in the National Nuclear Security Administration's Nuclear Security Enterprise. Competitors used a streamlined application process and a greatly reduced upfront fee of $1,000.
Beginning in mid January, Americans will be able to view profiles of the companies and vote on those that could contribute most to the country’s economic and energy future. An expert panel will evaluate the companies and identify those that have most advanced their business plans. See the top innovator Web page.
Among the companies competing are Vorbeck Materials, based in Jessup, Maryland, which is using a Pacific Northwest National Laboratory-developed method for building tiny chemical structures to greatly improve the performance of lithium-ion batteries. And, Boulder, Colorado-based e-Chromic LLC will use electrochromic technology developed by the National Renewable Energy Laboratory to create a new thin-film window material that reflects sunlight on demand, making windows more energy efficient while reducing cooling costs for consumers. See the DOE press release and a White House blog on startups.

Researchers at DOE's Joint BioEnergy Institute (JBEI) announced on December 22 a major breakthrough in engineering systems of RNA molecules using computer-assisted design. The innovation could lead to important improvements across a range of industries, including the development of less-expensive advanced biofuels. Scientists will use these new "RNA machines" to adjust genetic expression in the cells of microorganisms. This will enable scientists to develop new strains of Escherichia coli (E. coli) that are better able to digest switchgrass biomass and convert released sugars to form gasoline, diesel, and jet fuels. JBEI is led by researchers at DOE's Lawrence Berkeley National Laboratory.
A breakthrough with E. coli could lower the cost of producing advanced biofuels from switchgrass or other non-food biomass plants, with the potential to replace gasoline. While the work at JBEI remains focused on the development of advanced biofuels, JBEI's researchers believe their concepts could help other researchers to develop many other desired products, including biodegradable plastics and therapeutic drugs. For example, some researchers have already started a project to investigate using the "RNA machines" to increase the safety and efficacy of medicine therapies to treat diseases, including diabetes and Parkinson's.
Biological systems are very complex, which makes it difficult to engineer systems of microorganisms that will produce desired products in predictable amounts. JBEI’s work—featured in the December 23 issue of Science magazine—is the first of its kind to set up and adjust an RNA system in a predictable way.
Specifically, researchers focused their design-driven approach on RNA sequences that can fold into complicated three-dimensional shapes called ribozymes and aptazymes. Using JBEI-developed computer-assisted models and simulations, researchers then created complex RNA-based control systems that are able to program a large number of genes. In microorganisms, "commands" sent into the cell will be processed by the RNA-based control systems, enabling them to help develop desired products.
A major goal of synthetic biology is to produce valuable chemical products from simple, inexpensive, and renewable starting materials in a sustainable manner. Computer-assisted models and simulations like the one JBEI developed are essential for doing so. Until now, such tools for biology have been very limited, and JBEI’s breakthrough in applying computer-assisted design marks an important technical and conceptual achievement for this field. JBEI is one of three Bioenergy Research Centers established by the DOE’s Office of Science in 2007. See the DOE press release and the JBEI website.

DOE announced on December 21 awards totaling nearly $7 million in research and development funding that will help to reduce the current costs of electric vehicle chargers by 50% over the next three years. With DOE support, manufacturers in California, New Jersey, New York, and Pennsylvania will work to improve the development and design of charging equipment. This research will promote "smart" charging capabilities that can help ensure electric vehicles enhance, rather than strain, existing electrical grid capacity.
Two of the four selected projects will focus on improving electric vehicle chargers that attach to consumers' homes and are used by the owners to charge their vehicles while they are at home. Two other projects will focus on chargers used at commercial and public locations to charge large numbers of vehicles, including commercial fleets of delivery vehicles.
These research and development investments will leverage additional investments from the industry grantees. See the DOE press release and the DOE Office of Electricity Delivery and Energy Reliability website.

The U.S. Department of the Interior (DOI) announced on December 20 the approval of two utility-scale renewable energy projects, including the first renewable project on public lands in Arizona and a solar energy project in California. Combined, the two projects will generate nearly 500 megawatts (MW), enough to power 150,000 homes, and create 700 jobs during peak construction. Also, DOI announced the first major step in developing an offshore wind transmission line on the Atlantic Outer Continental Shelf.
DOI approved the Sonoran Solar Energy Project, proposed by a subsidiary of NextEra Energy Resources, LLC, making it the first-ever renewable energy project approved for construction on public lands in Arizona in the desert southwest of Phoenix. The project's photovoltaic (PV) panels are expected to generate 300 megawatts, and the project will create 374 jobs through construction, operation, and maintenance. Also approved was the Tule Wind Power Project, located 70 miles east of San Diego, which will produce 186 megawatts of electricity via 62 wind turbines sited on public lands, or enough to power up to 65,000 homes. Proposed by a subsidiary of Iberdrola Renewables, the project is expected to create 337 jobs.
DOI also took the next step toward developing a Mid-Atlantic Wind Energy Transmission Line. Atlantic Grid Holdings, LLC has requested a right-of-way grant to develop a high-voltage direct-current line that would collect power generated by wind turbine facilities off the coasts of Delaware, Maryland, New Jersey, New York, and Virginia. With the new line, up to 7,000 MW of wind turbine capacity could be delivered to the grid. DOI's Bureau of Ocean Energy Management opened a public comment period on the potential environmental effects of the proposed project. The agency is also asking whether other developers are interested in constructing transmission facilities in this area in order to determine whether there is overlapping competitive interest. See the DOI press release, a DOI fact sheet on onshore renewable energy

, and a fact sheet on offshore renewable energy

Posted by CROATIAN CENTER of RENEWABLE ENERGY SOURCES at 1:00 PM