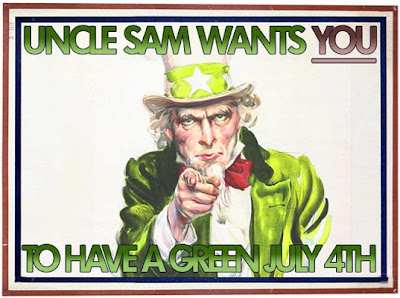 There’s a reason solar advocates love Independence Day. The bright July sunshine means that solar energy systems from Maine to California are pumping out free, clean energy for their owners. These solar pioneers are harnessing our abundant solar resources and are helping make America energy independent this Fourth of July.

Most people don’t know that America is the birthplace of the modern solar energy industry. In 1891, an inventor from Baltimore named Charles Kemp filed the patent for the first commercial solar water heater. The Carnegie Steel Company modernized the design a few decades later.

In the 1950's, Bell Labs created the first modern solar electric cell using silicon, which is still the semiconductor of choice for many solar panel manufacturers. Bell’s technology leap helped the U.S. win the space race by providing the “killer app” for satellite power generation.

In 1974, five major industry members decided to form the Solar Energy Industries Association; the first trade association for solar energy businesses in the U.S. In 1979, the White House installed what would be the first of many solar installations at that site. (This article from the Washington Post discusses the first installation during the Carter administration and the recent announcement by President Obama, but doesn’t mention the panels that the Bush administration installed in 2003.)

I won’t take up more valuable fireworks-and-barbeque time with a lengthy dissertation on solar energy in America, but if you’re a geek like me, we’ve got some great resources for you. For example, Solar Works for America tells the stories of regular people across America who have found jobs in the solar industry. As one of the fastest growing industries in the country, we hope that solar can help you be economically independent through “going solar” yourself, training for a solar job or maybe even starting your own solar company.

Solar energy is a classic American success story of technology, innovation and competition. In the coming months, SEIA will be announcing a lot of new ways to help you fight for a solar-powered America. Enjoy the fireworks, but stay tuned: the real solar revolution is just beginning.