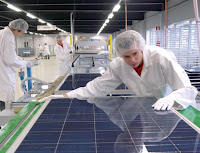 DOE announced on August 19 it has finalized a $197 million loan guarantee to SoloPower, Inc., for constructing and operating state-of-the-art thin-film solar module manufacturing facilities at sites in Portland, Oregon, and an existing site in San Jose, California. At full capacity, the facilities are expected to produce more than 400 megawatts of flexible photovoltaic (PV) modules annually. SoloPower estimates the project will create approximately 450 permanent jobs and 270 construction jobs.

DOE announced on August 19 the offer of a conditional commitment for a $133.9 million loan guarantee to Abengoa Bioenergy Biomass of Kansas to develop a commercial-scale cellulosic ethanol plant in Kansas. Project sponsor Abengoa Bioenergy US Holding, Inc., estimates the project will create approximately 300 construction jobs and 65 permanent jobs. The project will be located in Hugoton, Kansas.

The bioenergy project is expected to convert roughly 300,000 tons of corn stover (stalks and leaves) into approximately 23 million gallons of ethanol per year using an innovative enzymatic hydrolysis process. The project maximizes the use of agricultural crop residues that would otherwise not be utilized, and it uses feedstock that does not compete with feed grains. Annually, the project is expected to displace more than 15.5 million gallons of gasoline, which will avoid more than 139,000 tons of carbon dioxide emissions. The facility will be self-sufficient, using unconverted biomass to generate 20 megawatts of electricity to power the cellulosic ethanol plant. DOE's Loan Programs Office has issued loans or loan guarantees, or offered conditional commitments for loan guarantees totaling nearly $40 billion to support 42 clean energy projects across the United States. See the DOE news release and Loan Programs Office.

The Advanced Biofuels Process Demonstration Unit was commissioned on August 18 at a DOE Lawrence Berkeley National Laboratory (LBNL) site in Emeryville, California. Built and operated with funds from the American Recovery and Reinvestment Act and the DOE, the facility will enable researchers and engineers to test promising new processes for biofuels production that will support the domestic biofuels industry and improve the nation's energy security.

The 15,000 square-foot facility, backed by $17.7 million in Recovery Act funds, will improve collaboration on bioenergy research and development efforts. DOE's Office of Science Bioenergy Research Centers, DOE-supported researchers, academic institutions, non-profit research organizations, and companies will be able to use the facility to test and develop emerging biofuels technologies at a larger scale than was possible before. See the DOE press release, the LBNL press release, and the DOE Biomass Program website.

The world's first tri-generation fuel cell and hydrogen energy station, supported by DOE, was commissioned on August 16. It is called "tri-generation" because it is a combined heat, hydrogen, and power system that co-produces hydrogen in addition to electricity and heat. The system, at the Orange County Sanitation District's wastewater treatment plant in Fountain Valley, California, will provide transportation fuel to the public and electric power to an industrial facility.

The hydrogen produced by the system is sent to a hydrogen fueling station that will be open to the public and can support between 25 and 50 fuel cell electric vehicle fill-ups per day. The fuel cell also produces approximately 250 kilowatts of power for use by the wastewater treatment plant. This on-site approach to hydrogen production advances hydrogen infrastructure technologies that will accelerate the use of this renewable fuel. Also supporting the project was a partnership of the California Air Resources Board, the Orange County Sanitation District, and private industry. See the DOE press release and DOE's Fuel Cells Technologies Program website.

The U.S. Department of the Interior (DOI) announced on August 17 the initial steps to develop commercial wind energy on the Outer Continental Shelf offshore of Rhode Island and Massachusetts. DOI's Bureau of Ocean Energy Management, Regulation and Enforcement (BOEMRE) issued a "call for information and nominations," which invites developers to identify locations within an offshore area in which they seek commercial leases for developing wind projects. BOEMRE is also seeking public comment on important environmental issues and reasonable alternatives related to the proposed leasing, site characterization, and assessment activities in the offshore area under consideration.

The announcement is the latest step in the "Smart from the Start" offshore wind initiative to facilitate renewable energy development offshore. The program aims to improve coordination with state, local, and federal partners, identifying and refining priority areas for potential development and conducting early environmental reviews. Four wind energy areas offshore of Delaware, Maryland, New Jersey, and Virginia were identified in February this year, and BOEMRE expects to begin the commercial leasing process in those states as early as 2012. Potential wind energy areas will also be identified soon in additional states. All comments or other information should be submitted by October 3. See the DOI press release, the lease description in the Federal Register

For the U.S. Department of Energy Solar Decathlon 2011, the University of Illinois at Urbana-Champaign is returning to the National Mall with the Re_home, which offers a more sustainable housing solution for communities following natural disasters. According to team members—who are aiming for a balance between good design and smart planning—the Re_home responds to the physical and emotional needs of displaced families while still demonstrating the ways in which environmentally aware living can be incorporated into a community-led recovery effort.

What makes the Re_home different from previous disaster relief housing is the flexibility of the home's design. The Re-Home is more adaptable to the various lifestyles of disaster victims when compared to the typical mobile home style trailer commonly used in today's disaster relief efforts. The Re_home offers an efficient and open floor plan that accommodates the various needs of many users. The floor plan was designed around one open area for public spaces and another area, enclosed, for private spaces, which encourages an open interaction between both interior and exterior spaces. This "flex space" allows the house to transition between one- and two-bedroom homes, and gives occupants several ways to customize the space to their liking. See the Energy Blog post.

The U.S. Department of Agriculture (USDA) announced on August 17 grants for more than 900 agricultural producers and rural small businesses to implement renewable energy and energy efficiency measures. The grants, totaling more than $11.6 million and covering all 50 states, are being provided through the Rural Energy for America Program (REAP). This program offers funds for farmers, ranchers, and rural small businesses to purchase and install renewable energy systems and make energy-efficiency improvements.

Funding of each award is contingent on the recipient meeting the conditions of the grant agreement. Grants can finance up to 25% of a project's cost, not to exceed $500,000 for renewables or $250,000 for efficiency. See the USDA press release and the complete list of recipients

The U.S. Army announced on August 10 the establishment of the Energy Initiatives Office (EIO) Task Force, which will serve as the central managing office for the development of large-scale renewable energy projects for the Army. The scale of renewable energy production needed by the Army to provide enhanced energy security is estimated to require investment up to $7.1 billion over the next 10 years and is expected to generate 2.1 million megawatt hours of power annually. The Army has a goal of 25% renewable energy by 2025. The task force will be operational by September 15.

The EIO Task Force will work within the Army to streamline existing acquisition processes and leverage industry for the execution of large-scale renewable and alternative energy projects on Army installations. Army installations currently are pursuing renewable energy infrastructure but often lack the expertise needed. The newly announced task force will fill this expertise gap and will provide resources aimed at working with the private sector to execute large-scale renewable energy projects. See the Army press release.

What Kind of Projects Have You Done in School?

Ponderosa High School principal David Ross feels that the school's wind-and-solar hybrid system presents an opportunity for students. Ponderosa is an alternative high school in Arizona that helps students earn a high school diploma or GED. The school's approximately 75 students range in age from 17 to 20, and the majority are Native American or Hispanic, mostly from underserved communities.

Posted by CROATIAN CENTER of RENEWABLE ENERGY SOURCES at 4:50 PM