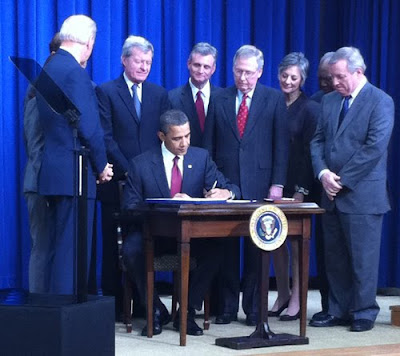 “It took a year of tireless effort from the entire solar industry and our champions in Congress to get an extension of the 1603 program. President Obama and our bipartisan champions in the Senate and House recognize that the solar industry is one of the fastest growing industries in our country, and this extension will create tens of thousands of new jobs for Americans.

“This is a great day for America’s solar industry. With an extension of the 1603 program now in place, the solar industry can continue its record growth, creating new career opportunities for Americans in all 50 states in 2011."

The program was created by the American Recovery and Reinvestment Act (Section 1603) to provide commercial solar installations with a cash grant in lieu of the 30 percent solar investment tax credit (ITC). President George W. Bush signed the 8-year ITC into law in 2008, but the economic conditions created by the global recession made it clear that few would be able to utilize the tax credit.

So far, the TGP has helped move forward more than 1,100 solar projects in 42 states and supported $18 billion in investment. The program has been critical in allowing the solar industry to grow by over 100 percent in 2010, create enough new solar capacity to power 200,000 homes and provide work to more than 93,000 Americans.

About SEIA®:
Established in 1974, the Solar Energy Industries Association® is the national trade association of the U.S. solar energy industry. Through advocacy and education, SEIA is working to build a strong solar industry to power America. As the voice of the industry, SEIA works with its 1,000 member companies to make solar a mainstream and significant energy source by expanding markets, removing market barriers, strengthening the industry and educating the public on the benefits of solar energy. www.seia.org

We won, thanks to you.

Just a few short weeks ago when the President announced his agreement with Republican leadership on tax legislation, the situation looked desperate. The critical solar grant program had been part of an earlier tax package, but it was not included in the negotiated compromise.

With your help, we turned that around in 72 hours. You sent thousands of messages and helped us make the case to key members of Congress that the grant program was critical to continuing the growth of solar energy in 2011 and they heard you! Last Friday, the President signed the tax package into law including a one-year extension of the Section 1603 renewable energy grant program.

But what's all this for? How does it help create a clean energy future for our country? This polic creates a critical financing option that supports solar growth in all 50 states.

See for yourself how solar is working for America. Solar energy is springing up all across the country, in places and ways that nobody would have guessed even 3 or 4 years ago. The Solar Generation Road Trip shows how solar is already generating reliable, clean energy and saving customers money today. But now we can reach more communities across the country.

This was a huge win for the solar industry, the economy and the planet. Thanks for making 2010 a great year for solar!

Wishing you a great holiday season,

We would like to take this opportunity of thanking our partners for their continued patronage and of sending them our best wishes for Christmas and the New Year.